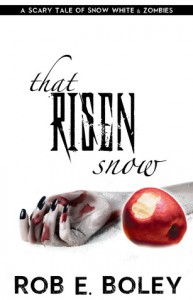 Snow White bites the apple offered by the old woman and she is placed into a deep slumber until Prince Mikael wakes her with true love's kiss- but this is all of the normal fairy tale that you will find in That Risen Snow.  Snow White wakes up, but she isn't acting right and immediately takes a bite out of Prince Mikael.  As Snow White spreads her disease, the dwarves try to fight back only to be taken down themselves. The dwarves believe that a cure can be found to save their beloved Snow in a nearby town, but trying to survive the Horrors to get to the town proves harder than they thought.  Along with the Prince's soldiers, the remaining dwarves make it to town only to find that Snow's curse is bigger than they thought.

I loved the idea of Snow White mixed with zombie;  bringing parts of the well known fairy-tale together with nightmarish horror. My favorite parts were some of the flashbacks to Snow White's past; we learn she wasn't the perfect little Princess in this version of the story.  The dwarves history is also very interesting. I liked learning about how they came to be and how they earned their names; these dwarves are far from perfect also.  The narration begins with Grumpy the dwarf, he probably has the strongest voice and character.  However, the point of view skips around through all of the other dwarves, the Prince, the soldiers and the Queen.  All this jumping around provided a few too many voices, I think it would have been more effective sticking to one point of view.  The twist at the end was a surprise to me, I'm glad that the story will continue and it seems like we will get to learn more of the Queen.

This book was provided for free in return for an honest review.