The Secrets of Lizzie Borden 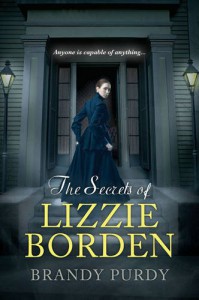 Everyone knows the story of Lizzie Borden, but no one is exactly sure of what happened that day in 1892 when her step-mother and father were killed.   Brandy Purdy reimagines the story that Lizzie herself might have told it.  In retrospect, Lizzie looks back on her life from a young child to her death and gives us an idea of what is going on in her head.  While fiction, I did learn a lot about Lizzie’s life, especially as a child through a young woman.  Lizzie’s childhood may not have been great, even though her father was a wealthy businessman; he was incredibly stingy and did not allow his girls to have any pleasantries.  Lizzie’s mother died young and her older sister, Emma oversaw Lizzie.  Her father made Lizzie believe that any man would only be after her money.

Lizzie character was incredibly surprising in this story.  Due to her strange upbringing and tragedy early on in life, Lizzie never seemed to grow much in mental age.  She seemed stuck in the pre-teen to teenage stage where she felt that she should deserve everything in life just because and not have to work for anything.  I think this part of her personality had much to do with her choices later in life.  The other aspect of Lizzie’s personality that was focused on was her need for love; this also had a large impact on Lizzie’s needs and life and affected her decisions.  Overall, I loved the tone of the book.  There was a great deal of dark foreshadowing which led to an appropriate amount of creepiness.   This was definitely a unique look into a disturbing and tragic historical figure that kept me reading.