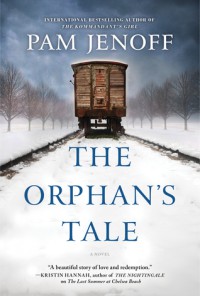 Noa has been cast out of her parents house at sixteen after becoming pregnant with a Nazi soldier's baby. After the baby is born with a darker complexion than her perfect Aryan features, the baby is taken from her. Noa finds work at a train station where she must watch people come through on their way to concentration camps. One winter's day, a boxcar full of babies comes into the station. Most of them are already gone-except one. Noa risks everything in taking a baby that looks so much like the one taken from her. She escapes into the woods where she is found and taken in by a German circus. Herr Neuhoff's circus is struggling during the war, but still performing. He has already taken in Ingrid-now Astrid- a Jewish circus performer who had been cast out by her Nazi husband. Astrid is a trapeze artist and Herr Neuhoff thinks Noa could learn to perform with her so their act can continue. Astrid and Noa have a rocky start, but Noa has found a safe place for herself and the baby, so she is determined to make things work.


I was immediately drawn in by the idea of the circus during World War II. It seems so contradictory, however, was probably a bright spot for many people during this time. Noa and Astrid are both amazing characters that are bases are real stories from the time. Their stories elicited compassion, friendship, joy, and heartbreak as the two women find their places. As Astrid and Noa grow closer, they find more in their similarities than differences and create their own family. Another part of the book that I enjoyed as much as learning about another facet of World War II was the circus lifestyle. I loved learning about the trapeze and Noa's strength made me want to try it out myself. Also, Peter the clown seeming amazing and I wish that I could see his act today. I do wish that the story would have extended more into baby Theo's life, however the epilogue helps the with that. Overall, an engaging, memorable and heartbreaking story about a different aspect of life during World War II.

This book was received for free in return for an honest review.
Historical fiction