The Fire By Night 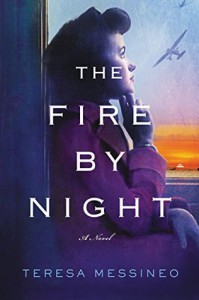 Jo McMahon and Kay Elliott are friends and nurses in New York City.  When the call goes out for nurses to serve in the war, Jo and Kay enthusiastically sign up. Jo and Kay are sent to opposite fronts.  Kay begins her service basking on the beaches of Hawaii only to have the reality of war come crashing down on her quickly. Captured by the Japanese and transferred to an internment camp in Malinta, Kit has only begun to scratch the surface of the horrors of War.  Jo eventually ends up in France, her field hospital is set up to transfer, but the Doctor keeps her back with six patients who don't fit on the transport van. However, the transport van never comes back for them.  Eventually running out of supplies and hope, Jo does her best to keep her soldiers alive until help arrives.  Both women try to think of happier times in their friendship to keep themselves going.


Powerful, captivating, raw and real, I could not tear my eyes away from Jo and Kit's stories.  I of course knew that women did much more in the War than they were ever given credit for, but Jo and Kit's stories are just two small examples of how much the heroic nurses accomplished.  I was astounded by Jo's courage, strength and skill in keeping her six soldiers alive while danger loomed constantly around her as well as Kit's will to survive the dark, festering internment camp where people were constantly dying of starvation.  The alternating story lines between Jo and Kit kept me rapidly turning pages to see where their stories would lead.  I enjoyed that Kit and Jo were very much their own person and chose different paths.  Their experiences also showed the real effects of war.  I was constantly amazed by how much I didn't know about women's roles during World War II, especially the nurses who were captured in the Japanese internment camp and how they were forbidden to talk about their experience.  Deemed the 'Angels of Bataan' these are the women who should be our heroes.  As Kit says "if the world of men ever tears itself apart again, it will take an army of nurses to put it back together."  Written with passion and rich historical detail, this is a story I will never forget.