Owen: Book One of the Tudor Trilogy 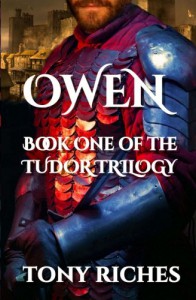 After the Welsh revolt of  Owain Glyndŵr, Owen Tudor is taken into the English Court as a servant.  He soon finds himself appointed as Keeper of the Wardrobe to the newly widowed Queen  Catherine of Valois.  In his position, Owen finds himself close to the lonely Queen as he runs the ins and outs of her daily life.  He is also very close with the infant King, Henry.  Owen is soon asked to spy on the Queen for the appointed Protector of the Realm, Duke Humphrey of Gloucester.  With loyalty to the Queen first and foremost, Owen lets Catherine know of the duplicity and becomes one of her most trusted men.  As the infant King grows, Queen Catherine's position becomes less stable and Owen stays beside her.  Through a secret marriage, children, a sorrowful death and an English uprising, Owen Tudor's lineage will become essential to England's future.

As someone who loves all things Tudor, I did not know much about Owen Tudor except for his parentage of Edmund and Jaspar.  Not much historical fact is known about Owen Tudor's life; however, Tony Riches has done a wonderful job filling in.  Rich detail of the time period and everyday life in Queen Catherine's household gives background for their romance to take place and for the Tudor lineage to begin.   One of the themes throughout the book is Fortune's Wheel.  Fortune's Wheel turns many times for Owen throughout his life.  I was continuously surprised at his ability to get back on his feet after tragedy or bad luck fell upon him: Owen marries Queen Catherine, but in secret, they are in hiding for many years, have several healthy children, but one birth will take Catherine's life, Owen receive the pardon of the King, but is still imprisoned.   Through Owen's eyes I had an honest look at Queen Catherine, a young woman who showed strength and resilience throughout her life but fell to the same illness as her father, Charles VI of France.  I was also very interested in Owen and Catherine's third son, Owen, who may or may not have lived.  Overall, an exciting and engrossing foundation to the Tudor trilogy.
​
This book was received for free in return for an honest review.