Written in Their Stars 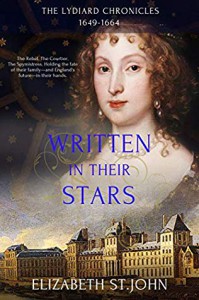 King Charles I has been condemned to die in the winter of 1649.  John Hutchinson is one of the 59 men to sign his death warrant, encouraged by his wife Luce.  With the death of King Charles, the St. John family is now thoroughly separated by political beliefs while Oliver Cromwell wreaks havoc over the land.  While Luce and John try to create a new government in England, their siblings, Allen and Frances seek refuge with what remains of King Charles court in Paris with the Villiers side of the family and Nan uses her position of Countess of Rochester to play both sides.  While the family is divided politically, their hearts are still tied together.

Written in Their Stars is the third book of the Lydiard Chronicles that recounts the story of the St. John family.  I would highly recommend reading the first two books of the Lydiard Chronicles first, not only because they are wonderfully written, but they also detail the families relationships and loyalties.  Like the previous two books, Elizabeth St. John uses the upmost care and detail to continue the story of her amazing ancestors.  This time, the journals of Luce Hutchinson were the primary source for the material and the author was able to transform Luce's words into an unforgettable family saga that incorporates the tumultuous history of England in the mid 1600's.   I didn't know much about this part of England's history, so I enjoyed learning of the details from both the Royalist and Roundhead sides.  Most of all however, I loved continuing the story of the St. John family and their amazing accomplishments during the time.  I was blown away by Nan's determination in the spy ring, Frances and Allen's fight for survival and betterment of their family and Luce and John's steadfastness.  Above all, their tie to family is what brings everyone through.  Overall, a story of bravery, family and treachery in 17th century England.

This book was received for free in return for an honest review.​