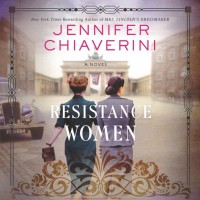 Mildred Harnack, Sara Weitz, Greta Kuckoff and Martha Dodd all come from different backgrounds.  Mildred is a doctoral student from Wisconsin and married to Arvid, a German. Sara is a literary student and Jewish. Greta is an aspiring author who loves theatre and Martha is the daughter of the US Ambassador to Germany.  These four women are living in 1930's Germany as Hitler rises to power and witness first hand the terror, hatred, destruction and lies that spreads throughout the country.  The women find each other and vow to resist the Reich in any way they can.  Mildred continues teaching, helping her students think for themselves as well as passing on information to Martha at the US Embassy.  Martha's vivacious nature helps her to make many friends around the Embassy that talk to her about their parents work.  Greta translates works so that other countries can read about Hitler's terrifying words.  Sara passes out flyer and posts stickers all over Berlin.  All of the women know the price they will pay if caught, and all are willing to risk it for their futures.

History has a way of forgetting the women who have had an impact.  Mildred Harnack, Martha Dodd and Greta Kuckoff were all real women that were part of the resistance network dubbed the Rote Kapelle.  From the opening where Mildred is imprisoned and still fighting, I knew I was going to love these characters.  The writing flows between each of the four characters point of views beginning in 1929 and ending in 1946.  This gives a full perspective of where each character came from before the war as well as how Hitler's ideologies were able to slowly infiltrate, take over and become the norm for Germany.  This also highlights how aware and free thinking that each woman had to be in order to not be swept up the ideals. Each woman's resistance ranges from small acts of passing along lists or putting up stickers to full out defiance of passing along coded radio messages and making sure written works make it to other countries.  Throughout everything that happened, Mildred, Sara, Greta and Martha never wavered in the convictions. Chiaverini's writing dives deep into their individual thoughts and feelings to let the women's power shine through.  Inspiring and thoughtful, Resistance Women  is a story of women from our past that will resonate with many people today.
This book was received for free in return for an honest review.