Confessions of a Sheba Queen 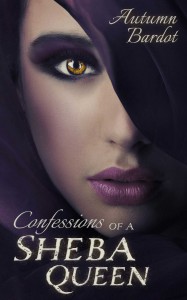 Bilqis is born to a jinni mother in the ancient lands of Saba, what is now known as Yemen.  Bilquis' birthday come with a prophesy- that she will have a great destiny to fulfill.  Bilqis doesn't seems to have the same talents as a jinn as her mother, but is easily able to soak up all of the knowledge that her mother can bring her.  As a young adult, Biqis learns of one of the jinn powers that she can use-her power of sensuality. After discovering the power of sex, Bilqis' world changes and opens. Then, tragedy strikes that leads Bliqis on a mission of revenge.  With her mission, Bilqis learns more of the terrible King ruling over Saba.  As Bilqis continues her journey, her destiny becomes clear- to end the King's regime and become the leader that the people need.