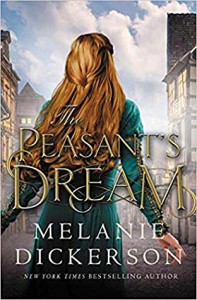 Adela, the youngest daughter of the Duke of Hagenheim longs for adventure and true love, just like her older siblings have found before her. When Adela hears that yet another suitor, the son of the Duke of Grundelsbach, Lord Barthold will be calling on her she decides to leave the castle unguarded and dressed as a peasant. While at the market, she meets Frederick. Frederick is a peasant who works tirelessly on his father's farm where his drunken father often beats Frederick and his mother. In his free time Frederick hones his wood carving skills and has found a job carving for the bishop of Hagenheim. Adela and Frederick ease into one another's company as they talk of art and their families. However, Frederick doesn't know of Adela's true identity and when some boys from the countryside hatch a plan to kidnap the Duke's daughter for some extra money, Frederick becomes caught up in their plan and his future as well as his relationship with Adela are compromised.


The Peasant's Dream is the eleventh book in the Hagenheim series. While reading the previous books will help fill in some details, it is not necessary to read them all in order to enjoy The Peasant's Dream. In this reversal retelling of Cinderella, Adela and Frederick are able to find love on their own and form a deeper and meaningful bond than simply meeting at a ball. There were enough elements from the Cinderella story to make it recognizable, but also plenty of new twists to add excitement and suspense. Adela and Frederick's character's both had depth and interesting backstories. I really enjoyed that they were able to bond over art and tales of their family even though they were from such different backgrounds. The suspense and excitement was kept heightened as the plan to capture Adela goes awry, Barthold's jealousy takes over and Lord Conrat begins to meddle further. One thing I didn't particularly enjoy was the addition of the overly religious themes. I understood its place in Frederick's wood carvings, but it seemed overbearing at points. Overall, The Peasant's Dream is a fast-paced, enjoyable fairy tale retelling and a pleasant addition to the world of Hagenheim.