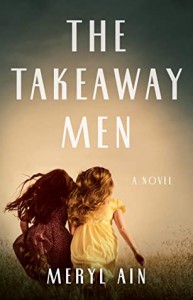 Aron and Edyta Lubinski have survived the horrors of Poland during World War II. Edyta risked her life to relocate children and then hid Aron away in her attic. After the War, Aron and Edyta don't feel comfortable in Poland and find their way to a Displaced Persons Camp where Edyta converts to Judaism and gives birth to twin girls, Bronka and Johanna. Aron and Edyta find a way to the United States where they live with Aron's relatives, Izzy and Faye. Once in America Aron delves deeper into his religion and attempts to forget about the horrors of his past, never talking about his story. Dyta strives to be the best Jewish wife she can be while Johanna and Bronka find their place in American culture. The girls grow up knowing they are Jewish, but without any knowledge of their parent's past. As Communism stretches into their neighborhood, the family witnesses a Jewish neighbor being arrested for ties to Communism and Aron is immediately reminded of his time in Poland. His fear transfers to his daughter Bronka who yearns for the full story while Johanna takes a more carefree approach to life. When the truth of their parent's past comes through, Bronka and Johanna are shocked while Aron and Edyta must finally come forth with the secrets of their family. The Takeaway Men is an insightful and heartfelt look into the experiences of Jewish immigrants after World War II. Aron and Dyta's experience was unique, although no less harrowing than many of their Jewish neighbors in New York. It was interesting to see the different approaches to dealing with the trauma that each family experienced during the War from constantly telling everyone they meet their experiences, to trying to enact revenge, and trying to hide their experiences from everyone. The effects of Aron's fear and shame was apparent through Bronka's panic attacks and showed just how lasting trauma can be. It was really thought provoking to see the similarities drawn between the arrests for Communism in America and for being Jewish in Europe. The story was told from the third person point of view in order to incorporate everyone's very different experiences; however, through this lens, I didn't feel like I connected with anyone. At the end, I was happy that the truth had come out, but I did wish that I could see the effects of this on the twins. This book was received for free in return for an honest review.