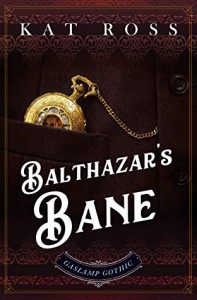 Balthazar, an ageless former necromancer is on a quest to rid the world of the evil necromancers that remain. His latest bounty brings him to Egypt where he quickly dispatches John Mortlake. However, the easy kill comes with strings attached. John Mortlake has debts with the djinn and a daughter who absolutely refuses to pay the debts for a father she equally despised. Balthazar gets waylaid after Mortlakes death by a beautiful woman and ends up on a Nile cruise. Balthazar's wiles get the best of him though, as the woman he is chasing steals the talisman that has kept him alive for over 2000 years. In trying to retrieve his talisman, Balthazar gets tied up in the woman's troubles and finds himself imprisoned by the djinn in a magical desert kingdom and now must retrieve a sword from a demon in order to escape with his life and his talisman.

Enchanting, fun and action packed, Balthazar's Bane continues the world of the Gaslamp Gothic series. I really enjoyed getting to know Bathazar and Lucas better. The writing dives into some of Balthazar's lengthy past and his history with Lucas without slowing things down. I was in a love/hate relationship with Zarifa's character based on her changing actions. She was strong, independent and free thinking, mostly one step ahead of the guys. Most of all, I loved being transported to the magical city of Al Miraj and exploring the many inhabitants of the city along with their dwellings and items. The trails that the demon led had me enthralled as Balthazar deftly fought his way through. Thoughtfully weaving in themes of growth, good vs. evil and respect for all living things, Balthazar's Bane entertained from beginning to end and I can't wait to see what these characters get into next. This book was received for free in return for an honest review.